If you love Maui, where can you learned about 75 people over five decades today and yesterday that made Maui, Maui? 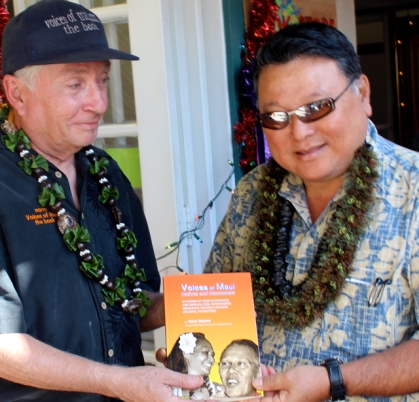 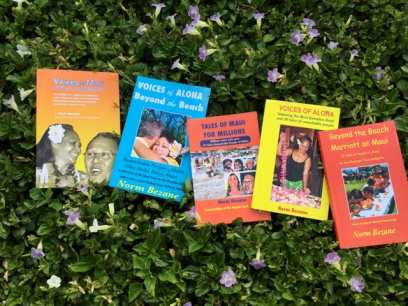 Kaaanapalli, April 29–You can go to my on=line bookstore that debuts today, order one of my popular books and free priority mail shipping.

Maui Weekly has described the series as “Intriguing and Illuminating. “

Lahaina—Author and Columnist Norm Bezane has opened a new on-line bookstore called Joys of K to sell books about the significant people who have made Maui, Maui over the last 50 years.

The first offerings at Joys of Kaanapalil.com include his “Voices of Maui Natives and Newcomers, “Maui for Millions,” and Voices of Aloha featuring more than 75 profiles of remarkable people who have made Maui, Maui over the last 50 years.

The store can be accessed through Joys of Ka’anapali.com, a four-year-old daily photo blog that has more than 1700 followers and has had nearly 10,000 views.

Those profiled include The Renaissance Man  George Kahumoku came to Maui in 1992  The Hostess  Laura Blears is in her third decades working for Kimo’s.   The Bird Man  Brian Botka began photographing birds in 1989.   The Performer  Willie K turned music professional in 1991.   The Lahaina Luau Pioneers 108Old Lahaina Luau continues to thrive in 2015.  The Catamaran Clan The first Trilogy excursion launched July 5,1973 The Musical Legend 237IZ popularized Over the Rainbow here, died in 1997.The Artist 138Jim Kingwell first landed on Maui in 1955 at age five. The Pop Artist 141 Davo began creating Warhol style pop art in 1983.The Showman 13     Rudy  Acquino starred 15 years, retired in 2008.The Golfers 22    The Crenshaw’s participated in the Maui Skins in 2010.The Restaurateur 25  Peter Merriman opened Hula Grill in 1984 The Chef   25  CJ opened his comfort food restaurant in 1984.  The Server  Christina was named a manager in 2013.    he Lei Lady 39  Fayth Marcinano left lei selling in 2014 to teach yoga.  The Catamaran Clan 43  The first Trilogy excursion launched July 5, 1973.  The Surf Shop Owner 47  Wayno Cochran landed in Maui in 1960 to sur/.The Preacher 51Pastor Laki opened Church on the Go in 2008.The Realtor   54Bob Cartwright joined Whalers Realty in 1983.    The Concierge Malihini Keahi-Heath celebrated her 24th year at the Ka’anapali Beach Hotel in 2015.    The 400,000 Mai Tai Man  Dale Simonson joined Ka’anapali Beach Hotel in 1970 ,  The Author 67The author first visited in 196,has s lived here 15 years.The Loyal Friend 74Kea Aloha was born on Hawaii Island in 2008.ing Legend 90   Emma Sharpe taught hula beginning in 1923. The Singer Song Writer  Amy Hanaiali’i won four music awards in 2007.   The Older Timer Sammy Kadotani still serves community in his nineties.  The Entertainer The Morning Goddess began her at KPOA in 1983.   The Ricebird Roz Baker joined the Hawaii State Legislature in 1983.  The TV Producer 157  Jim Kartes opened the Paradise TV channel in 1974.   The King 170King Kamehameha unified the Hawaiian Islands in 1810.   The History Buff Jim Luckey started on historic preservation in 1973.  The Mill Manager 19Keoki Freeland retired in 1979, saved smokestack.  The Visionary 203Theo Morrison has made history here since 1979.  The Architect Uwe Schulz helped complete the development of Whalers Village in 1970. The Kupuna 203Ke‘eaumoku Kapu first traversed Maui in 2008. The Kumu Church Dancer 207Kalele married in court after her fiancé was sentenced.